How a murderer’s talent for copywriting won him freedom

Next time you open a book on copywriting, I bet you won’t read a more surprising introduction than this one.

Louis Victor Eytinge, the writer of the excellent articles which compose this book, is a life-termer in the state penitentiary at Florence, Arizona.

That sentence greeted me last night when I opened Writing Business Letters which Get the Business – a once-popular series on copywriting that was published in 1914.

All six articles were so good – still valuable to any modern-day copywriter who cares to read them – that I felt no surprise when I learned it was Eytinge’s copywriting talent that ultimately set him free.

But as I pieced together the story of how he did it, the both joyous and wry twists of Eytinge’s tale kept my jaw glued firmly to the carpet.

Let me share them with you. I’m sure you’ll be as gobsmacked as I was.

On the trail of the murderer turned copywriter

You can’t fail to be fascinated by Eytinge.

Take a look at this photograph, taken when he was a prisoner. 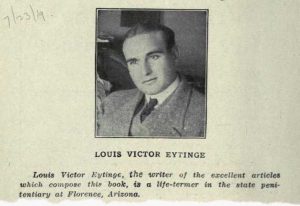 If you’re anything like me, you’re probably wondering how an incarcerated felon could be so sensitively featured and neatly groomed. Decked out in starched collar and nicely-tailored suit, with nattily-parted hair and a masterfully clean shave – this is no ordinary jailbird.

But is this really a former student who was expelled from Notre Dame University for writing bad cheques?

Could it really be a disgraced sailor who was kicked out of the US Navy for stealing?

Is it believable that this man, fresh from a jail term in 1907, was held responsible for snuffing out Joe Leicht’s life with chloroform, stripping him of valuables and abandoning his corpse in the Arizona desert – decorated with a handkerchief bearing an embroidered letter ‘E’?

The jury at his trial certainly believed so. And as for the fraud – his mother used to tour the country, frantically trying to honour the fraudulent cheques he scattered in his wake.

But by 1907 Eytinge himself was almost past caring. The Cairo Herald later told of how, when Eytinge was arrested in San Francisco in possession of some of Liecht’s property:

He was then in the last stages of consumption, a drug fiend and apparently did not have long to live.

Yet, once in prison, this man embarked on an enterprise that not only gave him a reason to live, but one that later brought him wealth, a stint as a Hollywood screenwriter and won him his freedom.

He became a copywriter. 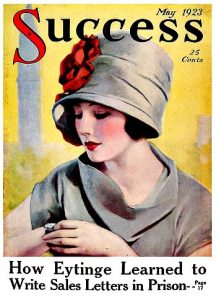 Eytinge became a copywriter because of his illness.

Laid up in the prison hospital, where he was expected to die from his tuberculosis, he became increasingly bothered by mosquitos.

The only problem was that he had no money for netting.

So he cut out the names of two curio dealers from the advertising pages of a magazine and wrote to them, offering to sell horsehair trinkets – hat bands, watch fobs and the like – made by himself and the other prisoners.

The letters worked. He also had something to write future ones with – he got in touch with the Remington Typewriter Company requesting a machine on credit.

The firm went one better – it gave him the typewriter.

(That, at least, is the romantic story told by Napoleon Hill in a 1956 edition of the Miami Daily News. Eytinge himself said that a typewriter firm sent a lifer – “like myself” – a machine on such terms the prisoner could afford from his earnings).

By the end of the year, Eytinge was sending out letters to about forty dealers and he had organised the prisoners into a formidable team of manufacturers.

He put on weight, regained his health and the other prisoners made money from the enterprise.

At this point Eytinge clearly had a knack for writing sales letters. But then something happened which made him hone his skills to become one of the greatest copywriters of his generation.

Although Eytinge was incarcerated in jail with a progressive regime (the Governor, George Hunt, liked to encourage his inmates to become active citizens) the authorities decided the creative prisoner could send out only two sales letters each month.

It was then, according to the New York Times that he

…learned the secret of writing sales letters of such pulling power that they were the wonder of the business world.

He did brisk business. And when the embargo on his letters was lifted, he really put his new skills to  work – he wrote to businesses asking for their sales literature.

He would then rewrite what he was sent and return it; and the businesses who acted on the new copy made huge increases in their sales.

Before long he was making about $5,000 a year from his cell (much of which, to his credit, he spent on milk and eggs for sick prisoners) and had a standing offer of a $10,000 salary from a New York agency – in the event that he was ever freed.

He also began to build a name for himself in different ways. His booklet Giving Letters Life and Decent Dress – which I’ve sadly been unable to track down – was first read at the World Advertising Clubs convention in Toronto. He took up the editorship of Postage, the magazine of direct mail advertising. And he won a silver cup in a US-wide content among advertising men.

Then, in 1922, a movie with a screenplay by Eytinge – Man Under Cover – was being shown in theatres across the US.

“Get into the envelope and seal the flap”

But why was Eytinge such a good sales writer?

What did he do that pulled him in such a staggering income while in his prison cell?

You can find the answers in Writing Business Letters which Get the Business. If you had to summarise Eytinge’s approach on a single reading, you’d probably come up with something like “Don’t bullshit and always see things from your prospects point of view”.

Or to put it his way – “Get into the envelope and seal the flap.” Write as though you’re in the room with your prospect.

You can see from the list of article titles to your left the furrow that Eytinge was ploughing. It’s a furrow that many of today’s copywriters could do with walking.

But short of reading the book itself, it’s worth looking at Eytinge’s parting shot and comparing it to the “Citizens – we are glad to deliver ice” school of advertising that was prominent in his day.

We are entering upon a great era of changing commercial ideals – the world is moving along toward idealism. Business men are demanding that the guiding law for commercial conduct shall be the Golden Rule. The letters that win most are felling this influence – and because of this – my parting suggestion is: If You Want Your Letters To Pay Better, Put Into Them The Qualities and Associates You Demand for Your Daily Life – Especially the Good Associations.

(If only all businesses and agencies had grasped this today, nearly a century later…)

Eytinge was finally released from captivity in 1923.

The money he had earned from sales writing had allowed him to hire a good lawyer. And throughout the later years of his captivity, the advertising industry clamoured for his freedom – in 1915, the annual convention of the Associated Advertising Clubs of the World both cheered Illinois’ new measures to prevent fraudulent advertising and passed a resolution urging the Parole Board of Arizone to let Eytinge go:

Eytinge, it was said, had in the eight years he had been in the penitentiary serving a life sentence completely rehabilitated himself physically, mentally and morally, and by the merit of the advertising work he had sent out from the penitentiary had made himself a figure in the word of advertising. For two years his papers have been read at the annual conventions.

With such powerful backing, it was only a matter of time before Eytinge was able to take up the open invitation of that $10,000 a year post. And when he walked free in January 1923 he was met by the head of his new agency with these words:

“Well Eytinge, your enthusiasm has proved more powerful than the bars of this prison.”

At first, Eytinge made the most of his freedom. Two days after his release he married Miss Pauline Diver and in 1924 was named (not without controversy) as one of the supporters behind a proposed skyscraper church in Gotham.

The letter he wrote for this campaign, reprinted in the St Petersburg Times on 3rd May 1924, is the only direct mail of Eytinge’s I’ve been able to run to ground in the 24 hours since I first read about him.

Have you ever heard of any one loaning money to God?

Yes – and having an actual 5 per cent interest paid, the loan being secured by mortgage? Not only would the investment be quite profitable and safe, but it can bring in tremendous happiness through contribution to the community welfare.

A great magazine editor said recently that America today needs a great cathedral, but it must not be on the Continental plan, beautiful architecturally – it would have to be American in idea, serving the community in a material as well as a spiritual way. That idea is becoming a reality. Here upon the highest point in Manhattan is planned that American cathedral, to have a church auditorium seating 2,200, a social hall for 1,000, swimming pool, gymnasium, cafeteria, nursery for mothers and scores of practical, helpful community efforts that will make Washington Heights still more attractive as a residence section.

No – you are not asked to contribute one copper cent. No one is begging you for a gift. We are trying to interest you in an investment – a loan to God first, secured by income-earning property – but better still, an investment that will give vital happiness to your neighbors and more to yourself. All that we ask is that you read and study the inside pages and that you align yourself now and practically with the forward-looking people of our section, regardless of sect or creed, who are our partners in happiness.

Will you be one? Read the inside pages, then act.

I don’t know whether the church was ever built, but Eytinge seemed unable to settle for simple success.

In 1927 he was prosecuted for passing another bad cheque and – according to Joshua Blu Buhs – blamed his wife. But he was sent back to prison, reappearing in the news in 1930 to blame the cowardice of guards and administrative bungling for a fire at Ohio State Penitentiary.

But by 1933 Eytinge was back behind bars for swindling… and that’s where the trail goes cold. Buhs explains:

In 2006, a reporter for the Yuma (Arizona) Sun tried to find what happened to him after that, but was unable. Eytinge disappeared into the mists of time.

I doubt that Eytinge lived a quiet life from then on. And whenever I read about the great sales letters and advertisements of the 1930s and 1940s, I won’t be able stop wondering whether any of them were penned by the original ‘killer copywriter’ – Louis Victor Eytinge.